There is no question that buying equipment can be an overwhelming task.  Here is just one example of how working with the right company can solve problems through collaboration.

Establishing a relationship by asking questions

Sunsof Inc, an all natural traditional empanada producer out of Miami, Florida, first approached Blentech as a growing company looking to scale up while maintaining their product quality.

We took time asking questions and creating a plan of action by listening to determine what their goals were.

Listen to Edgardo Armando, CEO of Sunsof, talk about how he experienced a process with Blentech that started with a “feeling of support”.

Peace of Mind through Proof of Concept

Testing was an integral part in Blentech’s solution discovery process. We utilized our team of food process engineering experts to ensure success through a trial. Blentech uses testing to better understand your product and needs as well as to focus on your company’s goals. Sunsof’s products are “made with love” and we love what we do so the perfect partnership was built.

For Sunsof, their goals were to: 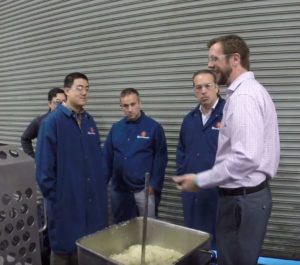 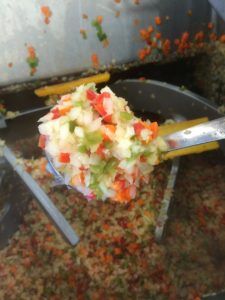 Edgardo also found value saying, “for us that test stage was key”.  Blentech believes that your food drives your success and that our attention to detail will deliver the best quality. Sunsof worked with Blentech’s food process engineering experts to enhance their procedures to meet and exceed their quality standards. Their product retained the desired qualities in

Save time and money

This preliminary testing allowed Sunsof to estimate throughput as well as batch parameters for accurate pricing and ROI.  By reevaluating using the outdated method of kettle cooking in use at Sunsof, the benefits of a BlenTherm were clear. Sunsof was able to experience the quality increases, savings potentials, and reduced stress on labor needs due to automation; first by testing and then by purchasing this equipment.  In working with the Blentech team, Sunsof saw that attention to detail with collaboration prevented expensive mistakes and allowed us to size their equipment correctly. One thing that the BlenTherm does especially well is the ability to cook and chill in the same equipment – an important factor for Sunsof. Using a BlenTherm also allowed for the ability to maintain clean label and wholesome product while increasing automation.

We are proud to work with companies like Sunsof and see their company strive and grow. Since installation, Sunsof has increased productions and sales by 30% and continues to grow.  From the beginning Sunsof had growth in mind, “We wanted to make sure this change would also bring us growth… and what is does is just make it easier” – Edgardo Hernandez.

How can we support your expanding business?

Find out more about the Blentech Innovation Center HERE then contact us to schedule a trial with us today!